The Tomb was EMPTY 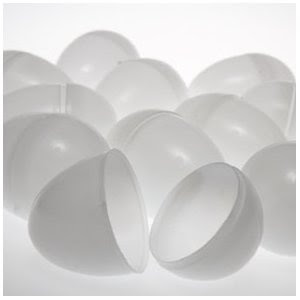 One Easter Sunday a teacher being creative, handed her class Empty Plastic Eggs , and asked them to go out side and collect an item that reminded them of Jesus , or the Easter story.
After everyone had come inside everyone Oooohhed and awed over the butterfly, or flower, beautiful blades of grass, or a twig. last came David. He was a quiet sometimes difficult little boy with Downs Syndrome. When it was his turn , everyone soon found his Egg to be empty. The teacher wondering weather he had understood the object of the lesson..then herd these words: " but the tomb was empty".
Three weeks later the class was attending Davids sweet funeral. The onlookers watched as child by child walked to the casket and placed an Empty Egg on Davids small casket.
The banner on his casket read: THE TOMB WAS EMPTY.

What a gentle reminder that because Christ resurrected, we can to. 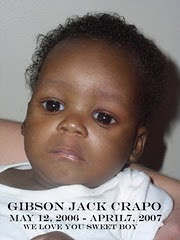 I rarely share our experience with losing Gibson. I guess in a way it has been too raw, and sacred to our family to talk about the small child that we will always ache to hold, and have faith that we will, someday
Two years ago on Easter Sunday, while sitting in sacrament meeting, I had a brief but strong thought or feeling, that something had happened to one of our children in Haiti. Knowing that Diva had been struggling emotionally...my heart sunk thinking, perhaps she had passed away.
I didn't share this feeling with anyone, not wanting my Husband or the kids to think I was crazy , or being negative. But I did carry that feeling with me throughout the week. Since we hadn't heard anything on, Monday, or Tuesday...i figured I was just crazy and filed that feeling into my PTSD of adoption issues.

Then early Thursday morning, we received a phone call. Before Hubbie answered the phone, I knew.
Thinking it was Diva, I watched my husband speak on the phone, in hushed tones, as tears formed in the corners of his deep blue eyes. "Okay, okay, when, how...okay, thanks". After he hung up ...all he could say was "Gibson".
Our baby boy, the child that shared our Wedding Anniversary for his birthdate, had become ill,he was throwing up and had severe runs.
They took him to the hospital...but Heavenly Father had other plans for him.
He passed minutes after arriving at the hospital, Gibson passed away from dehydration.

To my understanding Gibson passed on April 11th, Easter Sunday.
We gathered our children into our bedroom. Bugs was then 5, Scooby 3, and Peanutbutter 18 months. After a family prayer, we quietly explained to them that Gibson had gone to live with our Heavenly Father and that he was not going to be able to come home from Haiti. Bugs , very perceptive at five, asked :"so he died".
"Yes".

She took a moment to take it in, as a tear welled up in her eyes, she looked up at us, then a smile broke out on her beautiful face. "But Mama, he's gonna resurrect, so we just gotta be patient".

What simple faith, what an amazing lesson taught by a child.

It was hard because there was no casket, no family gathering ....and to many people in our everyday life ...his existence was not tangible to them ....so how can we mourn him?
But as we all ,know a true mothers (parents) heart falls deeply in love the first time you see that photo, or hear the heart beat...
heck I was in love after looking at a stick I peed on (Gross I know) that had two blue lines on it!

Not wanting to celebrate the date of his death...we waited until his birth date, May 12th to celebrate our little angel.


That Saturday morning I made Haitian Pancakes (as close as I could get
them)...we read scriptures and wrote/colored pictures for Gibson.
After planting our tree, we hiked up a grassy hill , read our
letters, tied them to five white balloons and let go.
We then sat down to eat our picnic and a couple of minutes
later...Bugs looked up at me smiled, and said "Mom, I bet he
just got out letters, cool , huh?"
Very cool!

It has been four years since his death. I have absolute faith and knowledge that I will hold my baby again.
I am so grateful for this season. 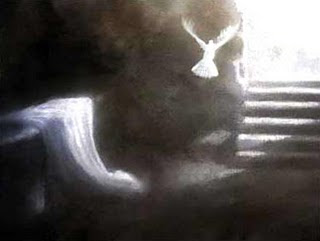 Have a Beautiful, Relflective, Gratitude Filled Easter....
Because :

"The tomb was empty"

"But Mama, he's gonna resurrect, so we just gotta be patient".

I will,I will be patient.
Posted by Lindsay Mama to Nine at 6:23 AM

Me, the crazy one they call Mama...

I stink at blogging, no really I do...by the way I am dyslexic and can NOT spell worth a darn, but I write anyway.

I have the best of intentions...but life happens.

I am parenting NINE amazing kiddo's.
One that is no longer safe enough to be in my home...and I mourn that, every day.
This blog is about being flawed but doing the best you can do. It is about parenting some Fabulous kiddo's with some heartbreaking problems. We are just a family.
A family living, laughing, crying and shaking it up as much as we can to ward off the effects of severe trauma, anxiety, depression, psychotic tendencies, suicidal ideation, addictions, bulimia, anorexia, ADHD, Sensory Processing Disorder,Hording, Post Traumatic Stress Disorder, they and we are surviving by the skin of their teeth, everyday, but we are NOT giving up.
This blog is about surviving daily life with a child with type one diabetes... I am just a Mom, dedicated to MY children, dedicated to being a Forever Family, and giving some of these kids whom have never had a safe anything, a HOME: a soft place to fall.

Who this is Really for!

Sooo if you have found us and just started reading... I am protecting my kids names out of respect. Lets be honest, if I am going to talk about their behaviors...they don't need their names out there...because it is the BEHAVIORS that are hard, it is the anger and destruction of the trauma that they experienced that needs to be named, my children are deep down good, with a whole lot of broken/nasty/ugly tossed over to disguise what is so wonderful about them. I have six with trauma disorders. That is what is SO gosh darn HARD... they see it and are triggered some-days, by just looking into each others eyes. MY AMAZING and sometimes ANGRY ELVES: We have 2 bio kiddo's:

Our kiddo's came home 20 days after the Haitian Earthquake. Hubbie and I traveled to Haiti 10 days afterward. It has deeply changed, traumatized and effected our family in soooo many ways. So on top of some MAJOR Attachment issues, we are also all coping with PTSD, ODD, RAD, SPD and Borderline Personality Disorder....this is OUR Season of Healing.